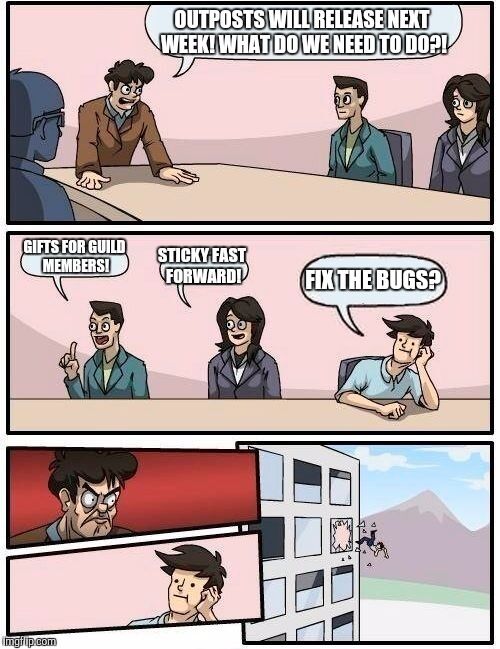 Just before the return of season 6 of The Walking Dead, the next update of No Man's Land introduces Human Enemies to combat. This is the start of something far more dangerous, with more ways to get hurt and more things to hurt you.

Episode 13: The Factory features the deadliest enemies yet - human enemies. Until now your survivors have only been tested by walkers. The Freemen and Raiders are a serious threat to the safety and security of your group and it's up to you to show them exactly who they are messing with. Human enemies will also feature heavily in the weekly challenges. In PvE missions, human opponents will treat both you and walkers as enemies. (Note: In this version, human enemies are melee only.)

New outfits from the TV show, including fan favorites such as Wolf Carol, Merle, The Governor and many more.

Council now upgrade to Level 15. Yes, that means upgrades on e.g. Training Grounds, Workshop and most importantly, your Survivors.

Other features:
Loads of unneeded equipment? Mass scrapping is now (really) available!
Link your iOS and Android devices using the Device Linking feature in your Settings!

More ways to hurt and get hurt: Bleeding and burning.
Bleeding is inflicted when a survivor reaches 0 health from a human enemy.
Burning can happen when you're in melee combat with a burning walker.
Both of these states will cause health loss until action is taken.

Fixed several ad related problems (e.g. crashing, not getting rewards)
Fixed guild hopping/cycling issues
Now only players part of a guild at the start of a weekly challenge will be eligible to contribute towards weekly challenge stars.
Walkers now react to attacks within their detection radius; the same as reacting to survivors moving.
You will now be consistently informed if a survivor of yours is subject to an upgrade, not just in certain screens.
Multiple other under-the-hood performance fixes.

The cost of Survivors Slots has been reduced.
The cost of Outfits has been reduced.
Opening a crate seems to only take 1 AP now not 2, whilst you cant move or attack with the character after opening, you do appear to get over watch from the survivor.
Added path in camp.
The camp button having a number - it's not just number of buildings that you can upgrade, it's also the number of buildings you have to collect resources from.
In the setting screen (top right corner) there is a new achievements button.

Regarding Rescue Missions after 1.6[]

As some of you may have already noticed, 1.6 included a change in the level of survivors gained from rescue missions. Previously, survivors gained could be over the level limit in the game at that certain time. This was an unintended bug, the fix of which should have been communicated with the release notes of 1.6

We do recognize that some players relied on these survivors to complete Hard and Nightmare mode missions, however for the long-term balance of the game and especially with player vs player combat coming out, it was imperative that we make the fix. This will help ensure a level playing field for everyone once we introduce Outposts to you guys later this spring.

Since there already are discussions about this change on here, I'm going to keep this closed and leave it pinned as an informative post.

Thanks to everyone for understanding. (From Teeceezy )

Black forest package (everyone got a survivors slots, 100 gold, full supply and one outfits)

You do not need to be in a guild to participate in weekly challenge.

Fleeing rule change to any survivors in a struggle will be left behind.

21 January 2016 : The Outpost beta recruitment opened (for Android only).

5 February 2016 : Beta invitations was sent out and players were able to start.

The beta is currently running with no published end date.

Community content is available under CC-BY-SA unless otherwise noted.
Advertisement